Five Ways Your German Workplace Will Differ from Your American One

1. Colleagues may bring in baked goods to share on their birthday

Let’s start with the fun, fluffy stuff. Once, when I worked at a high school in the U.S.A., I was greeted in my office on my birthday with a beautiful home-baked birthday cake by my boss (I still remember, Pat!) Granted, this may have been over and above what many bosses do, however, it is generally the typical order of things in America for people bring treats to YOU, the birthday child (assuming, of course, people know it’s your birthday) 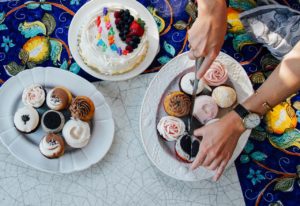 Happy Birthday to ME! I give you, dear colleagues, the gift of a calorie bomb!

So, you can imagine my confusion after moving to Germany when office colleagues would bring in cake, muffins and the like, followed quickly by a round of collegial handshaking and wishes of „Alles gute zum Geburtstag!“ to the bearer of the treats. Wait, what? I have to bake for my own birthday? Not every adult continues to do this, but surprisingly many do (because cake). Fifteen years on, I have to admit to still being slow on the uptake when my day rolls around. Maybe when I turn 80 I will have finally caught on. Whether I will still be in condition to bake is another question.

Although this varies widely between and even within companies, the business etiquette default in Germany is still to use „Mr. or Ms. Lastname“ when addressing bosses, subordinates, and colleagues. Bottom line: an American working in a German office is always well advised to listen carefully to and adopt the formality level demonstrated, and to use the formal „Sie“ unless invited to do otherwise or unless the German counterpart starts off by using „Du“.

Likewise, Germans will need to go Zen with being on a first name basis with those up and down the chain of command. Though hierarchy definitely exisits in American offices, the use of first names is not a vehicle for displaying it.

3. You will get generous annual vacation allotment—and be expected to use it

German law mandates a minimum of twenty workdays (Monday-Friday) of vacation per year; many companies grant more time. On top of this, Germany has between 9-13 paid public holidays, varying from state to state. If vacation days go unused due to business reasons or sickness, they roll over into the next year till around March. After this point, they are forfeited.

Bottom Line: people take their vacations, and so should you.

In contrast, a 2013 study by Oxford Economics found that Americans forfeited about 169 million vacation days. With no federal mandate for paid vacations, managers have been slow to actively push their employees to take whatever allotment is granted by the company. Another legal aspect at play in America is At Will Employment, which allows both employer and employee to end a working relationship without notice and thus adds an element of job (or advancement) risk for those taking extended time off.

Due again to federal laws governing paid sick leave, folks Do. Not. Come. To. Work. Sick. They do, however, need to obtain and present a valid physician’s note. For longer-term illnesses, an employee’s health insurance either helps pay some of the cost (for absences less than six weeks) or the whole cost (totalling 70% of an employee’s gross pay or 90% of the take-home pay for absences longer than six weeks).

The United States currently has no federal laws regarding paid leave due to illness.

5. You as an employee will have more involvement and influence in management matters.

Now to the heavier stuff, though this point brings us to a framework of laws too complicated to cover in detail in this post. Suffice it to say that the principle of co-determination (“Mittbestimmungsrecht“, say that ten times chewing gum while patting your head and rubbing your tummy) and the Works Constitution Act comprise the backbone of corporate law and the guiding principle behind industrial relations in Germany. Depending on the size of your company, your interests will be represented to management by a Works Council and / or by the presence of employee representatives at the supervisory and management board levels. Should you be elected by your colleagues as a representative on the Works Council, you will be receive regular trainings on the complexities of German Labor Law. Good times!

I am neither going to pretend that it is always smooth sailing between Works Councils and upper mangement, nor am I going to suggest that a 1:1 adoption of a similar structure would be feasible in an American corporate work environment. I will point to this interesting article that weighs the possibilities and pitfalls of doing so. For our purposes, it’s enough to say that in Germany co-determination is accepted, practiced and—for the most part—seems to work.

Adjusting to the German work environment (or an American one, if you’re from Germany) involves much more than operating in a new language. Before beginning your new assignment, book an intercultural training to get off on the right foot and to avoid unpleasant surprises.