As it does every single year, the Advent season is flying by faster than I can say “Pass the Plätzchen!”. Time to get Part II of the holiday series out before the Christmas Markets are dismantled and the last drops of Glühwein are [sipped, gulped or slurped, depending on how you roll].

So, to tie up loose ends from the last post…Nikolaus, of course–not Knecht Ruprecht–paid our house a visit. He was courteous enough to leave treats and trinkets that did not involve high-tech gadgetry (yes, there are a few folks who make the boot-stuffing an expensive affair). No, it did not snow at Europa Park, but no matter; the Christmas wonderland effects were nonetheless in full tilt: 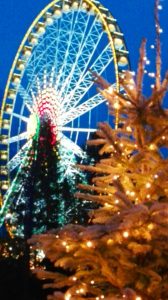 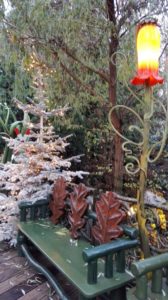 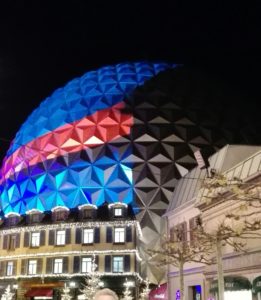 And finally: have we settled on a Christmas menu?

I’ve documented my struggles with meal planning during the all-stores-closed-for-three-days season. Hard as I am trying to overcome this challenge, no, as of this writing the meal planning is still TBD. Suggestions? Just NO TURKEY.

Festive Decor of the Season, German vs. USA-Style

As cozy and festive as the Christmas Market and department store holiday light displays are here in Germany, I admit to feeling a bit deprived. In the USA, no holiday season is complete without over-the-top private home displays of manger scenes, illuminated blow-up figures and synchronized-to-blaring-Christmas music light displays. In some neighborhoods, it becomes a friendly (or not) competition of sorts. If you think I’m making this up, have a look here. Germans, I know electricity costs multiples of what it does in the USA, but come on…Christmas only comes around once a year, right?

The most traditional of Germans (my in-laws included) put up and decorate the Christmas tree on Christmas Eve. Soon thereafter, the “Christkind” deposits the gifts. While everyone in the USA knows that Santa’s breaking-and-entering mode of choice is via the chimney, the Christkind seems to operate with more mystique. He also does not appear to require cookies and milk.  But I digress.

Nowadays, Germans are increasingly putting up the tree a couple of weeks before Christmas. Some folks strike a compromise, getting and stringing lights around the tree and leaving it in the purgatory of the enclosed patio till Christmas Eve. At that point, the tree gets the full ornamental treatment in the comfort of the living room.

At any rate, since we’re in the rare position of celebrating the holidays at home in Speyer this year, we will find a happy medium where the tree is concerned (as in, we’ll put it up this weekend). Gift exchange will probably take place according to German tradition on Christmas Eve, since we had a USA-style celebration last year.

And Speaking of Last Year…

Last year, after celebrating Christmas with my folks in western Pennsylvania, we started the trek up to Toronto, where we planned to ring in the New Year. The route connecting the two points passes straight through Erie, Pennsylvania, which made world headlines when it was hit with a record-breaking blizzard the day of our departure from my parents’.

Sensible folks would have scrubbed their northward-bound plans and come up with a Plan B.

But, no one has ever accused us of being sensible: 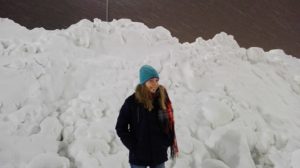 A slippery, snowy but safe arrival in Erie, in the thick of a record-breaking snow storm. It’s hard to see in the picture, but snowflakes are falling furiously. We loved it! 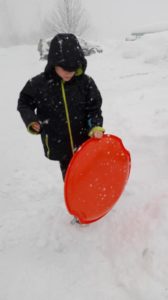 Somewhere under here is a hotel parking lot.

Germany, you’ve provided us with some wintry beauty over the years–especially in the Black Forest–but until you can top this, North America still has the clear edge on awe-inspiring weather events:

I would call this Niagara Falls, but during the Arctic snap of 2017/18, the only things falling were chunks of ice. The iconic cascades were literally frozen in time.

Because we’re super-weird this way, no Christmas season would be complete without a visit to the airport (Frankfurt being our closest major one) to enjoy the festive flair in our comfort zone…the bustle of international travel. This time we’ll have the luxury of taking in the atmosphere and decked-out terminals without the stress of having to catch a flight. Maybe we’ll get to watch some planes being de-iced! (see: “super-weird” above).

Otherwise, we’ll continue doing as folks in the USA are doing; namely, opening advent calendar pockets, finishing up the Christmas shopping and sprinting through the last intense week of business and school before more restful days descend on us.

Speaking of those (too-) restful days, I’m going to up the pressure on myself to settle on–and report –the Christmas menu by Part III of the holiday series. No 24-7 shopping over here, folks. Either I get my act together pronto or we go on an involuntary fast from the mid-afternoon of December 24 till December 27. Hoo boy, I have my work cut out for me!

Time to start making those New Year’s Resolutions for 2019! Do consider booking an intercultural or presentation training, so you and your company are in top form for business on the international stage!