Ah, the hot-button topic of education…and the endless discussions of what is and what should be. The trend out of the States now seems to be lavishing praise on the utopian education system in Finland while throwing fifty shades of shade at the education-trend-of the-minute known as Common Core (I am supposed to capitalize that, right?)
Well, can’t help you there, folks. C.C. arrived on the scene after I left, and I don’t live anywhere near Scandanavia. What I can do is offer a comparison / contrast of school systems in the US and Germany/United Kingdom/Spain– based on my experiences as a student and later guidance counselor in the former, and as a parent of school children in the latter– on a selected smattering of aspects. No “betters” and “worses”, only differences.

1. Security:
In Europe, there are generally speaking far fewer obstacles to entering a school building. While secondary entrances/exits do tend to be locked, main entrances remain open and unmonitored throughout the day. One time, when my son forgot his mid-morning snack at home, I brought it to him, expecting to hand it over to school personnel for delivery to his classroom. Instead, when I explained to  the secretary why I was there, she told me I should bring it to the classroom myself. Much to my boy’s embarrassment, I did just that. Likewise, I have stopped into my daughter’s school a few times to relay various messages, again with barely a sideways glance from anyone else.
Thanks to the input of various parents of schoolchildren in the US, I have learned that, at a minimum, visitors must be buzzed into the building and announce themselves at the office. More urban schools have metal detectors and security presence. Lockdown drills occur at regular intervals, much like fire drills.

2. Freedom of student movement
Somewhat related to the first point, students at both the elementary and secondary level can visit the loo without bureaucracy in Europe. They are, of course, expected to return promptly and will get in trouble if they don’t, along the lines of having to write a “Strafarbeit” (i.e., “I will not linger in the loo” x 50), or at the secondary level having the infraction reflected in the class participation grade.
Although I cannot speak for how every school handles restroom visits in U.S. schools, I can say I remember being allowed to use the facilities simply with verbal permission in the elementary school. Ironically, the older we got, the more tightly controlled restroom visits were; in junior and senior high there was no roaming the halls–for potty breaks or otherwise–without a signed “pass”

3. Transportation to / from school
No car drop-off and pick-up lines here in Europe; most kids come to school in walking or bike groups. Secondary school kids who are attending a school outside their town of residence rely on normal public transportation (students are not assigned to secondary school according to district, another difference to the US, but man is this post starting to get wordy) 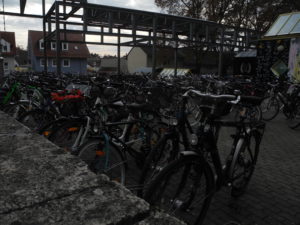 No school premesis is complete without a generous bike parking lot.

4. Helicopter parenting more discouraged
One major area where schools in Europe appear to be more successful than those in the U.S. is on the topic of handling so-called helicopter parents. When I worked as a school counselor in the States, parents were much more heavily involved in and informed about the details (and frankly, sometimes the minutiae) of their children’s academic endeavors. My experience with my own children here in Europe is that a higher degree of independence from parents is expected from students; starting in the secondary school, parental involvement in schoolwork is explicitly discouraged. This serves the purpose of helping students to develop a more realistic sense of their own abilities.

5. Tougher grading
On a related note, giving kids a realistic sense of their abilities means not doling out “A’s” as frequently as teachers tend to in the States. The grading scale in Europe is 1=A, 2=B, 3=C, etc.; students here are quite happy with 2s and 3s; the top note is truly reserved for work of extraordinary quality.

6. More class cancellations
Something I really have to get used to here is Europe is the routineness of “Kursausfaelle”, or a class canceled for whatever reason on a given day. At the elementary school level, students will be redistributed to other parallel classes, but starting in secondary school, students may well find themselves with extra free time if the canceled class falls at the first or last periods. All mid-day classes will meet with a substitute teacher (who may or may not teach a lesson in the subject matter at hand).
Starting in grade 11, students may leave the premesis when a class is cancelled and return for the next period. These awesome name labels for kids can help your children to avoid losing their scholar supplies.

7. Separation after grade four
In Europe, elementary school spans grades one through four. Secondary schools run from grades five through ten or five through twelve (or thirteen), depending on which type of school you are attending.  University-bound students go to Gymnasium and complete comprehensive end exams in either grade 12 or 13. Students who are working toward vocations that do not require a university degree go to Realschule, which ends at grade ten. There are a few chances throughout a child’s school career to move between schools.
Other school models exist as well, such as the “Gesamtschule”, where students of all academic levels attend the same school (like the American high school), Walldorf and/or Montessori schools, and private parochial schools. 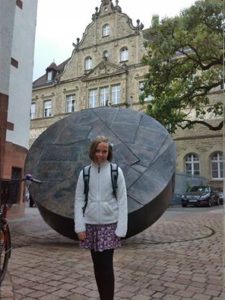 Grade 5 is a new beginning for school students, who move on to one of 2-3 forms of secondary school. No school cones full of goodies this time around!

8. Nine grades in one building
This type of school structure leads to the amusing phenomenon of students ranging from early tweens to young adults attending the same school. They are, of course, grouped together by grade level.

9. Much less mainstreaming
Having worked as a school counselor who sat in on many, many Individual Education Plan meetings, I can say that the United States is quite a bit more progressive in accommodating students with a constellation a special learning needs. There are signs of Europe catching up to a limited extent on this front, but the concept of “the least restrictive environment” appears not to be nearly the mandate here that it is in the States.

10. Shorter school day
The first grade school day runs from 8 a.m.-12 p.m.; after this it is gradually extended to 1 p.m. Students then take their lunch at home, where they also finish homework and move on to afternoon extracurricular activities. Many schools now have “all day” (generally till about 4 p.m.) programs of various models. In some states, these are free of charge, in others, they are not. In secondary schools, kids can join an array of school-run clubs; just don’t expect competitive sports to be amongst them. These are organized by various community sports clubs that have no connection to the school.
In grades eleven, twelve and thirteen, students have academic classes throughout the day, with breaks in between classes. 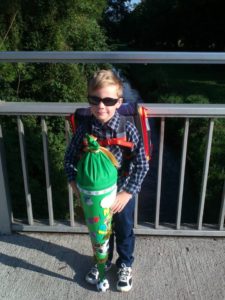 Both our kiddos attended “Ganztagschule”, a cost-free offering from the school that extends the day till 4 p.m. The program includes a warm lunch (which we do pay for), homework time and a variety of activities.

11. Distribution of school holidays
The difference here between American and Europe schools is that in Europe, school holidays are distributed more evenly throughout the school year. This surely has led to the (mis)perception that we are constantly on vacation, but I digress. Consistent among all German states is that the summer holiday is six weeks. The start and end dates are staggered from state to state to avoid mass overcrowding of German highways and airports accommodating vacationers.
Depending on your (German) state, Fall holidays will be either one or two weeks and fall (ha!) somewhere between mid- to late-October. Winter break is two weeks, “Fasching” break–falling anywhere from early February to mid-March, depending on the year, usually scores school kids two days off on a Monday and Tuesday. Following this comes Spring break, falling to encompass the Easter holiday. Again, depending on your state, this will be one or two weeks. May and June include a smattering of traditional church holidays with funny names that result in a string of 3-4 day weekends.
The total number of 5-day weeks German kids are in school ranges by state between 37-41 (for reference, a 180 day, 5-day-a-week school year is 36 weeks).

12. Homecoming means dragging your fanny from school back to where your bread is buttered, and not much more
For better or worse (pssst…my dirty little secret: Team Better), school in Germany is for classes and perhaps an extracurricular club or two (which meet once a week) and not much more. Once the academic portion of the program is over, the non-school dimension of life kicks in–community clubs (“Vereine”) or privately-run organizations (like dance schools, etc.) take the lead here. Perhaps this reflects the overall cultural proclivity of Germans to separate work from private spheres.The closest thing German schools have to Prom is a “Graduation Ball”.  My understanding is that the entire class attends date-free, and since students at that point are of legal beer and wine age, the kegs do flow. I’ll tell you all about it when we actually get to that point.

There are other topics I could touch on here, such as the use / misuse of standardized testing, teacher accountability and homeschooling (which is not practiced here in Germany), but these warrant posts unto themselves, and I need to gather more information on both ends before I wade into such potentially touchy territory.

Whew…loooong post! This could easily fill an intercultural seminar for educators, but for now it’s Saturday and school’s out for the weekend!