Three (-ish) Dos and Don’ts of Greetings: You Had Me at HELLOOO!

Greetings—and their cultural nuances—are easy to overlook in preparing for business communication. They’re brief, standard, issued multiple times per day without thought, and have little to nothing to do with the conversational or written content that follows.

And yet, failing to recognize a greeting’s cultural undertones can lead to confusion and even offense when interacting with folks from other areas of the world. Not a great foot to get off on when business is at stake. For this reason, it’s worth taking a look at the dos, don’ts and recurring stumbling blocks often encountered during the greetings phase of German / American business interactions. 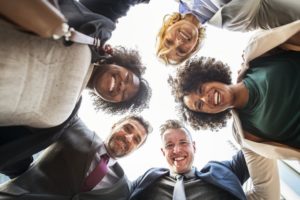 So, smiley group hugs like this are an exaggeration, but as a rule, Americans ARE more effusive than Germans in workplace greetings.

1a. Germans, you’ll do well to remember that Americans are comparatively effusive in their greetings. In business situations, they will be more restrained, of course; but even here, the first greeting of the day is often followed by „how are you“ as well as some words of small talk. As noted before, first names are the norm with Americans, whether during greetings or more substantive conversation. Definitely leave fancy-pants titles out of everyday greetings and conversations, unless you are making first-time introductions of titled colleagues or superiors. If you encounter the same colleague throughout the day, do not be thrown off when s/he continues to greet you throughout the day (usually with just a smile and a „hi!“). Go Zen with doing the same.

1b. An American who spots his/her German colleague in a public place (such as a restaurant, store, sporting event, etc.) is quite likely to come over with an enthusiastic greeting (or an effusive „Hi, Hans!“, accompanied by an equally lively wave from across the room). You as a German may well feel a bit embarrassed by this level of animation, and while you do not necessarily have to return the greeting at the same decibel level, you do really need to rally yourself with at least eye contact, a not-too-forced-looking smile and a „Hi, how are you?“ (or some variation thereof) in return. Otherwise, you may find your colleague throwing you into the „Germans-are-so-unfriendly“ cliché bin. And I would JUST HATE for that to happen to you.

2. And speaking of throwing folks into the unfriendly bin, I have heard from MULTIPLE Germans that Americans have a somewhat unfortunate habit of beginning e-mails with simply the name, sans greeting (as in „Hans, please give me your feedback on xyz. Thx.“). Okay, you want Hans’s feedback? He’s VERY UNSETTLED by the (from his POV) abrupt and potentially trouble-foreboding communication style you just used with him. Yes, I understand you did it in the name of speed and efficiency, but tacking on a „Hi“ will go a loooooong way in taking the bite out of a „cold open“. And Hans: don’t worry. A greeting-less opening is not unusual for Americans in business correspondence. Fewer keystrokes = time saved, or something like that. 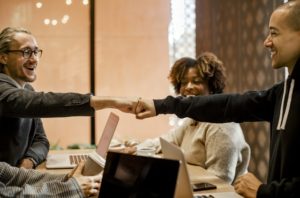 Even the fist bump is making its way into casual business culture…ideal for germophobes!

3. While German greetings vary considerably depending on the region, from „Guten Tag“ to „MoinMoin!“ to „Gruss Gott“ (surely I’m missing many variations), in the U.S.A., „Hi“ or „Hello“ do the trick no matter where you are. If it’s morning, „Good morning“ or just „Morning“ is the norm. Variations of „How are you“ are: „How’re you doing?“ (somewhat informal), „How’s it going“ (informal) and „What’s up?“ (very informal—only use with friends or very familiar colleagues).

In the office, handshakes are not necessary when greeting colleagues for the day, but a smiley „Hello!“ goes a long way. Firm (but not bone-crushing) handshakes are typical when meeting someone for the first time or greeting a colleague you have not seen in a while.

So, now you’re fit for meeting and greeting your American colleagues, and also prepared to deal with our quirks. Bottom line: lots of smiling and a heartfelt „hello“ or „hi“ is your ticket to business, American style. Get out that mirror and start practicing!

And…by the way, I managed to stay within the ABC scheme, today sponsored by the letter “g”.  Sneaky, aren’t I?

Would you like to practice American-style greetings and learn about other specialties of doing business with the USA? Give me a holler and we’ll set up a seminar!