Double the Fun (or Trouble): A Two-Culture Holiday Season Commences

It can’t all be business with me, folks. Especially not this time of year. So, for now I will lay aside my  ABC’s of Business series and dive head-first into the season of Glühwein, Plätzchen, Christmas Markets and goody-stuffed boots. Two cultures, so many holiday traditions, and so little time. Time’s a-wastin’ already. Ready, set…go!

Saturday of last week marked the kick off my favorite time of the year. The time of year where I milk two cultures’ worth of traditions for all they’re worth. This post will be a symphony in three parts; this week is, logically enough, Part I.

This was the day the Diehl household celebrated Thanksgiving, seeing as Thursday is just a normal work and school day for everyone in this part of the world. I pride myself on having been through this drill enough now to know how to time my preparations.

Bird was diligently ordered the previous week. I had taken care to specify the weight. I went to pick it up, and– as they tend to do with me every year– the Germans threw me a curveball. I get it; Germans do geese, not turkeys. Requests for fresh turkeys throw them for a loop. Which explains why they threw me for one right back by wheeling out a 35-pounder roughly the size of a small pickup truck and three times the size of what I had ordered.

After picking my jaw up off the floor, I concocted a Plan B, waved off the ill-fated fowl and hit the freezer section. I found a turkey that would actually fit in our oven and rushed home to put togther what I hoped wouldn’t be a disasterous meal. 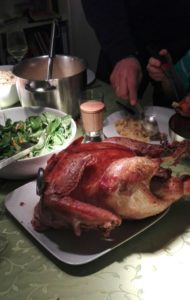 Public Service Announcement: it IS possible to roast a frozen-solid turkey to be ready by dinnertime. I don’t recommend it, but celebrating Thanksgiving outside the USA means you have to be prepared for anything. At least sweet potatoes, chestnuts and pumpkins are now abundant in Germany. A full Thanksgiving meal came together, and the Germans have another year to rustle me up a turkey that isn’t the size of Turkey. No harm, no fowl. Let’s move on to…

Though the town had been teasing us all week by stringing up lights and hauling in the familiar log cabin-like huts throughout the pedestrian street, it only became official on November 26: the annual Christmas and New Year’s Market opened for festive business.

As per tradition, my boy and I strolled in at dusk yesterday for the inaugural crepe with nutella. I skipped the market hot mulled wine (“Glühwein”) since we already have an opened bottle at home to be finished first. Fun fact: I nipped my first sip of Glühwein years ago in Austria, when I was still underage by US standards but well of age by European ones. Anyhow, I hated the stuff and vowed to never get within a 10-mile radius of a cup ever again. Nowadays I do enjoy it in the holiday season, but my taste for it is time-limited between November-January. There really is a time and a place for sweet-spicy-warm-winey beverages. 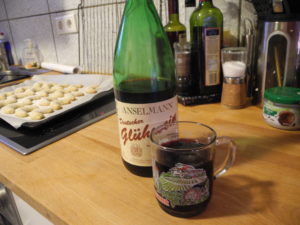 My family has made a tradition of visiting Europa Park in Rust during the holiday season. Winter may not be an obvious time to hit an amusment park, but this one does a great job of turning its sprawling area into a winter wonderland (replete with Christmas markets and ice skating rinks). The first year we went, it even snowed for good measure! 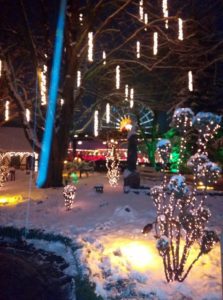 A wintry visit to the amusement park has become a favorite family tradition.

I reckon this will be the day to whip up our first batch of Plätzchen (Christmas cookies). I embrace American favorites such as Peanut Butter Blossoms. My very German girl will work her baking magic with jam-filled traditional German treats.

I am starting to salivate, so I best bring Part I to a close. Next week: did Nikolaus or Knecht Ruprecht pay us a visit? Did it snow in Europa Park? Have we settled on a Christmas menu? Stay tuned! 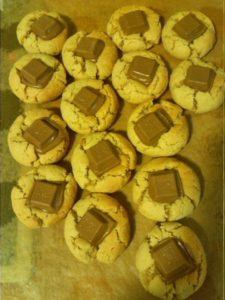 I leave you with American Peanut Butter Blossoms with a German twist. Just switch out kisses for chocolate squares!

What are your favorite pre-Christmas traditions? Drop a comment and let me know!

Time to start thinking about those New Year’s Resolutions for 2019. Why not make this the year you book yourself and Intercultural Training? Give me a holler and we’ll set up some training dates!