The five best things about summer in Germany

Let’s face it…it’s not hard to love summer no matter where in the world you live. Still, Germany puts it’s unique footprint on the season in many ways, five of which I’ll highlight here.

It is very easy in the summer months to underestimate how late it is. Given that I grew up in Pennsylvania—considerably south of my current location of Speyer, Germany—it is no surprise that even after sixteen years, I am still shocked to realize that I’ve allowed my kids to frolic in the still well-lit dusk with the clock chiming 10:00 p.m.  And it’s a good thing they have rolling metal window shutters in their bedrooms, or they would likely still be lying awake an hour later. 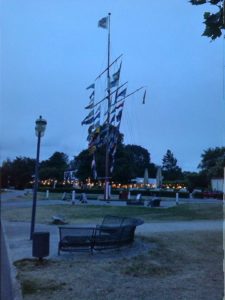 A twofer picture: Speyer at around 10:00 p.m., with the inviting lights of our favorite Biergarten illuminating the background. Ahhh…those summer nights!

But, no complaints here. The long days and extended evenings allow plenty of time to take a leisurely stroll to the nearest…

Do you like German beer? Do you like lovely „open air“ settings? Do you like plunking down and chatting for hours with your companions while friendly, efficient waitstaff serve you a foamy, cold brew and calculate your party’s bill on a cardboard beer coaster? If the answer is yes, then garsh, you ought to experience a German Biergarten at least once in your life (and yes, there are plenty of non-alcoholic beverage alternatives as well). Every two years, you can expect your locale of choice to be equipped with an outdoor large screen so patrons can sip while not missing a minute of…

Every alternating even year is either the European or World Cup Soccer Championship. This year, it is the former, taking place in the yard of our neighbor, France. For four jubilant weeks (or depressing, depending on how your team fares), locales, shopping malls, sporting venues and other places that accomodate crowds of varying size continuously broadcast the matches of the day (amusingly, these are referred to by Germans as „public viewings“, but rest assured that I have not observed a single open casket in the entirety of my time here).

Watching the soccer matches is a social event; during the World Cup two years ago, we had a go of hauling out our projector and hosting a small-scale viewing gathering a time or two (one of those times of course being the USA-Germany match). For those who have asked or wonder where my allegiance lies when Germany and the USA face off : I love my German eleven, but…..U-S-A! U-S-A!

The night Germany won the World Cup in 2014 was an unforgettable spontaneous, boisterous (and, to a certain extent, nerve-wracking) celebration, with folks rushing outside, setting off fireworks, honking car horns, and otherwise displaying all manner of exuberance and debauchery. 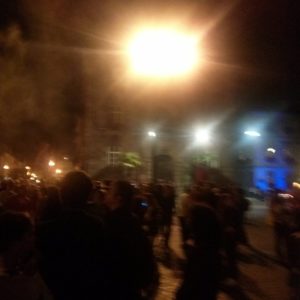 A grainy smartphone shot in the wee hours after Germany won the World Cup in 2014. Joyous pandemonium!

Fun fact: the first European Cup I lived through in Germany was in 1996, when Germany took the championship led by team capitain Juergen Klinsmann, now head trainer of the US National Team. Juergen and his teammates irreversibly infected me with the soccer bug. If there’s a cure, I want no part of it!

Summertime is kinder both to the waistline and the wallet in that a well-developed system of bike paths, coupled with pleasant weather and long days, makes hopping on the bike the transportation mode of first choice. Where I live, virtually any errand imaginable can be accomplished on two wheels (unless, of course, you just purchased a refrigerator). With the current amount of in-town constuction projects, it is also often the faster option for getting from point A to point B. Accomplishing daily tasks + saving on gas + burning calories + fresh summer air = win, win, win, win!

5. Schloss in Flammen (“Flaming Castles”)
Sounds alarming when translated word for word. In fact, this is a reference to the many castles that dot the German map being colorfully lit and surrounded by fireworks on select summer evenings. Because the only thing more magical that a European castle near a river is a castle near a river lit up in groovy colors. See what I mean here and here and here.

This list is anything but exhaustive, but it is time for me to throw open the back door, let the early summer air in, and finish watching the remaining minutes of the opening European Cup game. I wish you and yours a rip-roaring start to a summer filled with great times and even better weather! 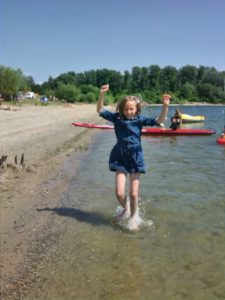 Business doesn’t stop just because summer is here! If yours needs an introduction to American business practices and norms, book an intercultural training with me. We’ll still have fun along the way!