Out with the Bachelor’s Degree, in with the Apprenticeship!

Last week during one of my trainings, I complimented a woman on her nearly-flawless English. She related how she had lived in the U.S. for ten years while married to her military husband. As she talked about her experiences and impressions from her time there, she mentioned that she had held several jobs over the decade, from shopping cart attendant to cashier t 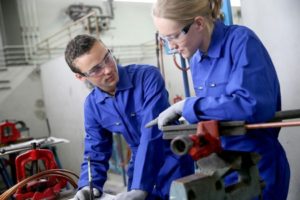 Wait….what?! The first two seem to fit together, but where did the dialysis administration come in?

She went on to say that she had undergone a six week training program…and then was sent out „on the field“. The other Germans in the group were pretty shocked. Dialysis administration here would be part of a more comprehensive and thorough medical assistant training apprenticeship that would take at least a couple of years. Sticking real patients with real (and long!) needles and other medical procedures would require much more in-depth training.

This anecdote highlights the significant difference in how Germany and America approach education and job training. In America, school students for the most part are kept together under one roof (although there are varying levels of the core classes). At most, students training for a vocation do a half day for up to three years at a vocational-technical school while attending their high school the other half of the day for their core academic courses. The training is not typically done in connection with any company looking to groom its next group of skilled company workers.

In contrast, depending on which path a school student chooses (starting in the 5th grade), more vocationally-inclined school students can attend a Realschule until grade 10; after this, they apply to a company or public sector office for an apprenticeship (Ausbildungsplatz). During the two- to three-and-a-half year period, they take theory classes related to the vocation for part of the week, and work at the company the other part. By the time the apprenticeship is over, the company has a highly trained worker who can integrate seamlessly into the full-time work environment. Oh, and apprenticeships are paid!

Recently, the U.S. federal government, in cooperation with American-based German companies and community colleges, has started introducing German-style dual-program apprenticeships in the United States. In 2014, the Obama administration pledged $100 million to apprenticeship programs, with more federal funds planned in the years to come. It is an expensive proposition, that much is certain. If the program expands on a larger scale, it will surely require philosophical and structural changes within the participating companies and community colleges, not to mention a change in the Bachelor’s-degree-is-the-best-way mindset of high school students and their families.

Ultimately, the investment will be worth it if it helps the United States turn out the next generation of workers equipped with the most up-to-date skill sets needed in a rapidly evolving marketplace. To send these freshly-minted apprenticeship graduates into the world without the albatross of crushing student loan debt is a significant bonus. The time for a dual-program apprenticeship system has arrived for the United States. Now will we embrace it?

Check out my intercultural training to learn more about the differences between the U.S. and Germany.